UPDATE 5: HUGE update today! Added lots of new effects, retuned the hitstop, and added new moves, including a branching combo system for Azumi! Test out pausing in between sword slashes for a second to trigger different combos!

UPDATE 4: 99% sure the random freezing bug is finally fixed. Had something to do with how cutscenes were controlled. Will be using a different method in the full game to avoid this issue cropping up again. Also added a seperate damage effect for sword strikes versus shurikens.

As of today, I'm entering production on the full game, so this will be the final update on the vertical slice. Thanks for all your feedback!

UPDATE 3: Tweaked the character sprites a bit,, adding an outline to separate them from the background a bit more.

UPDATE 2: Still trying to squish the intermittent freeze bug. Uploaded a new build that I think might have fixed it, but since I can't replicate it I'm just kinda guessing atm. I suppose you guys will have to let me know if you stumble upon it again ^_^;;

UPDATE: Squashed some bugs, and fixed it so the arrow keys no longer scroll the page!

Azumi and the Vertical Slice is a proof of concept for a 2D action platformer that attempts to bring modern indie speed and catharsis to the classic days of the Sega Mega Drive and Blast Processing.  Fight through a wave of enemies and escape the room you're trapped in!

This is the first game I've ever tried to build, so I'm sure there's lots of room for growth, which is why I'm posting here! Still a demo, or vertical slice, my goal here was to try and get good feeling movement, and juicy, cathartic combat.

Depending on reception, I'll either continue to make tweaks, or move on to building a full game with levels and bosses!

I recommend playing with a gamepad, since arrow keys seem to still scroll the window up and down when pressed.

Thank you for playing!

ok, the raccoon in  the thumbnail looks like hes on drugs.....

I hope it's not to late to post this, I feel so dumb for not doing this earlier. Such a great game and I am awaiting the full version!

Very clean, very polished in terms of graphics. Gameplay is super fluid too, albeit a slightly bigger shuriken would be better so they wouldn't keep barely missing those birds, but you can chalk that one down to just me being terrible.

The downside is the sound design. It sounds like it's trying too hard to be the stereotypical console retro with the buzzsaws and the overly bitcrushed voice. Let off the gas on that a little.

Otherwise it's great, can't wait for the full version.

Neat game concept. I don't usually care much for action platformers, but looks and plays better than I initially thought it would. It's clear you put a lot of time and thought into this.

Time for the bad news. I do not know if these are intentional, so feel free to call me out if I'm wrong.
1. The cooldown for air shuriken is inconsistent with ground shuriken. Air shuriken cooldown lasts only as long as a shuriken is on screen. The instant a shuriken disappears from hitting an enemy or wall, Azumi can immediately throw another one. Also, air shuriken do not cost meter.

2. Similar to shuriken, ground and air sword slashes are also inconsistent. The first 3 strikes of the ground sword combo cancel into each other, so the slashes will come out as fast as you press them. This makes killing the larger enemies too easy because you can mash them to death very quickly in a way that feels unintentional.

3. Attacking or dashing while holding the jump button will make Azumi immediately perform her double jump. This is a slight problem because of jump height being determined by how long you hold the button down, as well as air attacks killing your upward momentum.

4. Too much screen shake. It's a disorienting when both landed attacked and enemy deaths cause different amounts of screen shake in the middle of a fight, especially when being swarmed by enemies. Personally, it also has an unintended effect of making Azumi momentarily blend in with the background because of their similar color hues. I think this could be solved by giving Azumi a visible outline like in her concept art, but that's a more of a suggestion than a bug.

Aaaand that's it.
I look forward to playing the next update of the game!

Played for like 30 minutes, got as far as the Oni showing up (for reference on what i've seen). Right off the bat, I like this game a lot. for constructive criticism:

Rebindable controls are highly recommended. Having dash be on a trigger i feel would be way better, so i don't have to lift my thumb from attack to move around. Azumi's dash doesn't feel that important, as only the Oni enemy seems to benefit from having advanced movement, because the level certainly doesnt do anything for it.

The shuriken using meter i feel is a good choice, but the balancing for cost or regen is off I feel. I get too much meter too fast, and theres no meter management happening in my head at all, no reasons to consider my actions more thoughtfully.

I think the oni needs more wind-up for his attack, so the player has more of a chance to react to the swing, as it is currently, I dont think i have enough time without dash spamming.

For the love of god, change how zoomed in the camera is. I died plenty of times dropping from one level to the one below and a slime hurt me. What I'm landing on shouldn't be a question of am I going to get hurt or not, The player should have that information easily available to them. As i'm sure you know, losing in an action game should be the cause of the player not acting well enough to something, not by something they didnt see from out of nowhere.

Azumi 's dash should be straight, no arc to it going up or down. The player should know what their dash will be every time. If you want to add diagonals and have the dash be arched slightly thats one thing, but the aerial dash should be consistent.

I agree with what Nate said on a podcast, Azumi feels slippery. the jump doesnt feel exact enough, like theres too much input lag, probably an engine thing or because its on a browser, but I feel it is an issue.

Keep it up Tom, cant wait to see more!

I agree with everything said, though the drop-down-and-die problem could also be fixed with little notification bubbles appearing on the edges of the screen.

There's also the fact that when you press Jump/Attack at the same time, you will jump and the Attack-SFX will play, however neither an animation nor a hitbox is thrown out; so either remove the SFX or add hitbox + animation.

I had a great time listening to your development blogs. Super cool, glad I got a chance to play it! Looking forward to seeing what's next.

I feel like Azumi deaccelerates from max speed too slowly.  Also maybe make her hurtbox a bit smaller. One of the first tips the professors from the game development course I went to gave us was to be quite forgiving towards the player with hitboxes.

Cool cool, these are good suggestions, thank you!

Great job Tom, been a fan of the PCP for a few years now. Great to see my favourite podcasters make some actually interesting content.

i was excited to play this game, after seeing so many devlogs

I hope it was worth the wait! XD

The platforming and combat feels so good!

Thanks! I spent a lot of time tweaking it. Jan Willem Nijman's "The Art of Screenshake" talk was a huge help! 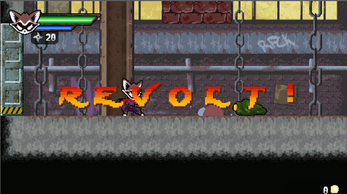 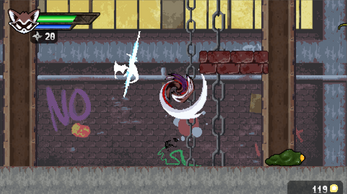 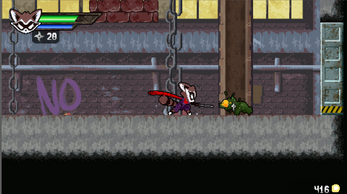